Collateral Punishment for all: government to overhaul justice system 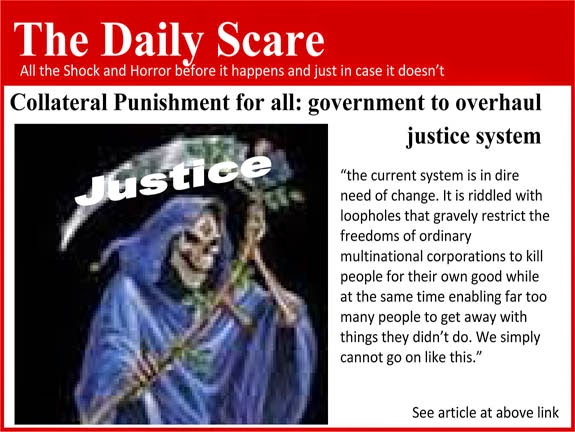 The government today announced plans to overhaul the justice system. The news comes in the wake of a nationwide survey that revealed alarming shortcomings in the current system. Responding to the news, ashen-faced Lord Justice Dredd said: “the current system is in dire need of change. It is riddled with loopholes that gravely restrict the freedoms of ordinary multinational corporations to kill people for their own good while at the same time enabling far too many people to get away with things they didn’t do. We simply cannot go on like this.”

The government plans to bring the country’s justice procedures up to speed with the 12th Century by introducing methods that have been found to be so successful in the field of international diplomacy. Innovative developments in international relations, pioneered by great minds such as the philosophers Genghis Khan and Attila the Democrat and exemplified by the US and other peace-loving empires have brought us many benefits such as peace being just over the horizon and increased profits for arms manufacturers and other humanitarian organisations.

Pioneered by the selfless diplomatic efforts of the US and UK in Syria, Afghanistan, Iraq and so on, the new procedures will enable prosecutors to go straight from allegation to execution without the intervention of costly trials, presenting evidence and other unnecessary steps that only served to delay fast-tracking a guilty verdict.

Under the new system, Lord Dredd will assume the newly established post of Lord High Executioner (LHE). The post will include duties hitherto assigned to different people but which will now more conveniently accrue to the same person. These duties include the following functions:


The post of counsel for the defence is to be abolished as unnecessary as it only gets people into endless arguments and invites mischievous demands for proof. In any case, it is self-evident that anyone really innocent would not have been accused of anything in the first place.

Lord Dredd’s duties will include a watchdog function in which he will scour the land for people he doesn’t like and then loudly suggest they might have done something. Formal charges will then be laid via the fiction department of Lord Dredd’s newly formed Media Liaison Office.

As people suggesting someone might have done something is all the evidence one really needs to be fairly certain that they probably did it, and as being accused of something is a sure sign of guilt, we will then be able to move straight to execution within days, thus saving everybody the hassle of having to think or the accused the trouble of having to attend a trial.

Expensive courts, court buildings and so forth will be abolished and a brief trial conducted in a “virtual unreality” world known as The Media specially fabricated from jigabytes of information streamed from such reliable sources as MI6, the CIA, Tel Aviv and Kiev, resources which we are lucky to have on account of their complete facelessness and reliability.

Articles in the press slagging off the accused, hitherto deemed prejudicial to justice, have been discovered to be all right after all and will now be treated as proof. Accused persons will be found guilty if the weight of media accusation establishes their guilt beyond reasonable thought.

Certain outmoded practices will now be phased out. Primary among these, for example, will be the notion that murder is unacceptable no matter who did it. Accused persons will be let off the hook if:

When someone is found guilty by weight of accusation, his family and neighbours will also be adjudged guilty by association (or geographic location) and subject to collateral punishment. The district in which the guilty person lives will be carpet bombed on the sound judicial principle that if you kill enough people you are quite likely to get the accused as well (unless he has moved) which, let’s face it, is the sort of vengeance that makes the hearts of men glow in the dark.

Apart from that is the fact that anyone sinister enough to be an innocent bystander or otherwise get in the way of the justice system’s Nerds-of the-Court and their blameless Missiles of Retribution is just asking for trouble. Besides, evil-doers are well known for their penchant for disguising themselves as innocent bystanders, children, pets and other agents of Beelezubub.

It is after all - as the philosopher Aristhrottle once pointed out -better to kill a hundred men on the off-chance they did something or were thinking about doing something than let one guilty man go free: there is no knowing what manner of harm he might then visit upon his fellow man.


Steve Cook is the author of Genghis Kant, a tongue-in-cheek sci fi spoof. See a current newspaper review here. Visit the Genghis Kant on Facebook for a free copy of Steve's latest story "Spilt Milk" of which one reader said: “Loved the Spilt Milk story. Loved the characters and how it all linked together.”