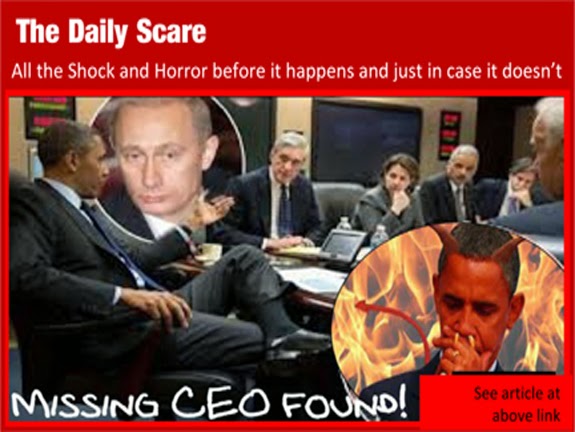 Missing CEO of Armageddon Inc, Mr Lucifer Beelzebub, whose whereabouts have been unclear for quite some time has reportedly been sighted and is thought to be alive and well and living inside Vladimir Putin.

We may well be seeing the end of a long and harrowing police search for the reclusive yet ubiquitous executive, who is wanted for serious corporate crimes such as creating genetically modified politicians in a number of countries, heading the so-called “New World Order” crime syndicate, inventing banking, socialism and skateboarding. He went on the run in 1945 from his last known lair: a bunker buried deep inside Adolf Hitler. The latest sighting, however, seems to have taken detectives by surprise for they had been concentrating their search on Washington in the belief Mr Beelzebub had been living rough for several years inside Barak Obama.

The trail that led them there had been a convoluted one. It had taken investigators on a merry but ultimately pointless chase across the world. Beelzebub had always managed to stay one step ahead of his pursuers, often laying false trails, either by employing the services of a double or, as is considered more likely, using his unusual ability to be in several places at the same time - or change into a swarm of flies when under pressure
.
It is thought he may have been helped elude his pursuers by friends in the media underworld such as the likes of Rupert “The Baron” Murdoch who runs the infamous “Washington Fibber” and its sister paper the London Scaremonger. Reports of sightings in Muammar Gadaffi and Bashar Assad may well have been red herrings designed to throw detectives off the scent. Yet a trail that led through Evelyn Rothschild and the entire board of Monsatan and finally to the outskirts of Obama had the NSA’s crack team of exorcists convinced they had all but cornered their prey.

This latest report that Beelezebub has been sighted in faraway Putin is nevertheless being treated seriously, buoyed by such convincing evidence as a sworn statement by Britain’s Prince Charles.

Prince Charles’ eye-witness account that Vladimir Putin is “just like Hitler” in every single respect (except the moustache) came in the form of a confidential report  to Mrs Doris Noggins of Trent at the opening of the town’s new Zimmer Frame showrooms on Gasworks Street. Unfortunately it was intercepted by several thousand TV crews who just happened to be pointing microphones in HRH’s direction at the time. It soon reached NSA investigators via the Evening News and was seized upon as a vital clue, Hitler having been the location of Beelezubub’s last confirmed sighting.

This was subsequently considerably bolstered by an urgent phone call from John McCain, inventor of the oven chip and recently voted “The Most Vacuous Politician in the History of the World” to the NSA’s Rapid Exorcism Response centre in Omen, Missouri.  McCain had been changing regimes in Ukraine when he spotted a man who fit the description of Hitler in several important details, such as having a large army on the Russia border, occupying St Petersburgh and “speaking in tongues” -  in this case Russian. Mr Mc Cain later explained: “I have a large number of friends who are just like Hitler so I’m well qualified to spot the signs.”

His sighting, coupled with Prince Charles’ was all the conclusive evidence the National Séance Agency needed to switch the hunt from Washington to Moscow. A spokesperson for the Whitehouse later issued a statement saying: “The President is pleased with these latest encouraging developments as they get him and his good friends in Monsatan right off the hook.”

A lead investigator for the NSA announced that “as far as we are concerned we now have Lucifer Beelzebub bang to rights and the mystery of his whereabouts is now over. All that remains is to mobilise a small team of some three hundred thousand exorcists armed with Holy Cruise Missiles to expunge his evil influence from the planet and everything from now on will be . . .  er, not at all evil. Our message to Beelzebub is that there is now nowhere for him to hide, at least until the next Presidential elections.”

The fugitive is ranked number three on the NSA’s All-Time Most Wanted list. He ranks just two places below Ed “The Grass” Snowden, winner of its Most Evil Man on the Planet Award and the top prize of a three hundred year holiday in Rendition, Diego Garcia. In the runner-up spot is Joe “The Beard” Iran, wanted for refusing to build nuclear weapons despite being told to on several occasions by John Kerry and thus leaving Israel seriously disturbed.